The loco has had much boiler work, the frames have been lengthened, new smokebox, buffer beams and a tender fabricated as there was not one with the loco. More recently the wheels have been re tyred and the valve gear significantly improved. Although Mr Scrimshaws idea of a LNER V2 class, she is more realistically described as a freelance model with rather a lot of LNER styling and features, ignoring the Great Western chimney top!

Starlight has made a couple of appearances at Ingfield, however she is more used to the owners portable track which is exhibited at Steam Rallies and events throughout East Anglia and sometimes further afield. 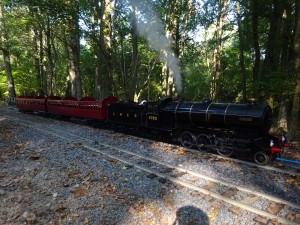