In 1982 Keith Wilson was commissioned to build a GWR 47xx for the late Walter Harper to run on the Oakhill Manor Railway in Somerset. Keith decided to build a second locomotive at the same time. 4700 ran for a few years until Oakhill closed. 4701 was sold to Ted Martin who owned the 7 ¼” Gauge Garden and Woodland Railway at Thame in Oxfordshire. The engine was occasionally steamed on a short section of track outside his workshop. As this locomotive did not fit in with the rest of his fleet it was sold on. The locomotive was put on static display in a pub in Somerset. It was then stored in a shed at the back of the pub where it was found by Joe Nemeth. He took it back to his workshop where he commenced restoration. I went to see the locomotive with Dave Wiseman and Bob Symes originally to give our opinion on it’s condition to someone else. As soon as I walked into the workshop I decided that I wanted to buy it myself. After raising the money, the engine was moved to Bob Symes’ railway at Greendene. Here the engine was run on air. The boiler was hydraulic tested at Aidan Favell’s and was found to leak in several places. It was removed and taken to the Bluebell Railway for repair. Stay heads were riveted over to ensure a good mechanical joint. Further boiler work was carried out by Mike Weedon back at Bob’s railway which culminated in a successful hydraulic test. After this the engine was reconstructed and painted ready for a steam test. 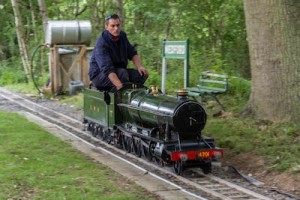 It was an exciting day when 4701 ran under its own power for the first time in it’s life. It ran up and down Bob’s garden several times and as the valves were adjusted it got better and better. It was at this point that we realised what power this engine had! When Joe Nemeth built the Berkeley Light Railway, 4701 was lent to operate on this line. Some great times were had building and operating this railway and Joe bought and restored the original 4700 from Oakhill. At this time Joe restored and repainted the tender including signwriting GWR on each side. The engine was exhibited alongside the Wiseman’s Duchess at the Warley Model Railway exhibition. When the Berkeley railway closed the engine was temporarily stored at Pulborough before being moved to Ingfield. 4701 has proved to be valuable at Ingfield as it will easily handle a full train load on the 1 in 36 climb. Also, many people have had great fun driving and riding behind it and that is what having an engine is all about. Photograph © Roy Harwood. Back to Locomotives