John Terence was buit in 1908 by Mr J A Holder's engineer, Grimshaw, with 14" driving wheels and cylinders 2" bore by 4 1/4" stroke. It started its time on the Broome Railway in Worcestershire, here it was driven by the Duke of York who later became King George VI on a visit to the black country. In the 1930's it was moved to the Keeping railway, Beaulieu. Here it underwent an overhaul of new piston valve cylinders and outside Walschearts valve gear which gave the engine a lot more power. Later the cab was changed, frames extended and a bogie replaced the rear truck giving the engine it's unique 4-4-4 wheel arrangementjt frames 2. After the war the engine left Keeping and was purchased by Charles Lane. It ran at the Royal Anchor Hotel at Liphook, Hants. Due to the railway then being reguaged, the engine was sold to Mr John Fowles from Hayling Island who was planning a railway there. 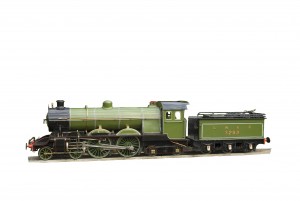 However the railway never got built so John Terence was sold again to Mr John Plumpton who took it to the Queen Mary's Hospital railway at Carshalton where it ran for several years before being transferred to Ingfield Railway. It was then sold to Barry Metcalf and was later sold to Chris Knibbs. John Terence was then kept at Birchley Railway in Kent, owned by Drummond Randell for many years where it was regularly steamed throughout the summer, before returning to Ingfield railway approximately 4 years later. In 2008 it celebrated its centenary. After it was returned to Ingfield the locomotive needed an overhaul. The main requirement was to replace the smoke box and cladding which was life expired and had holes in it. The locomotive was sent to Joe Nemeth Engineering at Easter Compton for the work to be carried out. This necessitated the boiler to be lifted from the frames. It was then found that the rear section of the frames was severely wasted and required replacing. After much contemplation the decision was taken to convert the engine back to an Atlantic. Care was taken to research the earlier incarnations of the engine and it was found that the engine had been made wider when it was converted to a 4-4-4. A compromise was reached and new rear frames and smoke box were built by Dan Nemeth and a new cab cladding and running plates were made by Joe. The locomotive was then repainted in LNER green and then returned to the railway. Over the winter a new set of rear springs have been manufactured. Also a new safety valve spring has been made by Mike Carol. Photographs © Roy Harwood Back to Locomotives