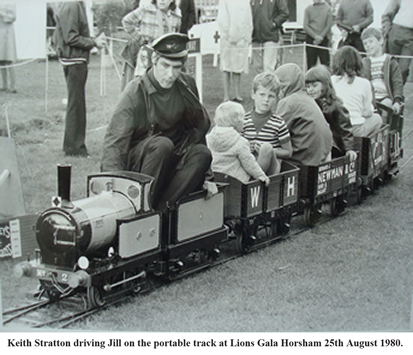 The Ingfield Light Railway has been known as The Manor Railway since 1973 when my husband Keith Stratton first established it. He was a master at the nearby Christ's Hospital School and in his spare time he built numerous scale battery electric engines and scale rolling stock which he took to many Fetes and Shows, using a portable track, so as to raise money for Ingfield Manor School. This school is a school run by Scope, for children with cerebral palsy and it was here that he found the site for the railway, with his aim being, to create a complete miniature railway for the benefit and enjoyment of the children at the school.

Over the years he gradually extended the line from its original terminus at Haven Road, through the formal gardens, across the marshland and up into the woodland, where along the way he created many lineside features such as level crossings, stations and halts, and with his high degree of care and his eye for detail, he made this into a most interesting and unique little railway.

He ran regularly for the school children and had always opened to the public, once a year for The Friend's of Ingfield Manor School Fete, and as this has always been the one big open day each year it has always brought many other interesting and impressive steam powered engines to the line, to visit for the day.

When my husband Keith passed away in 1993, with the support of my son Mark and a small band of helpers I continued to keep Keith's vision for the future alive, and this included completing the running line and building new carriage and engine sheds.

The railway begins at Haven Road station which is the headquarters of the line. This station has been provided with run round facilities, a single platform, a turntable, goods yard, engine shed and water tower. The initial clearance of the site took place in 1973 and was completed by 1976.

From Haven Road the line runs through a gap in the hedge, into the formal garden and around a left hand curve. It then follows the hedge to Garden Crossing Halt which has a platform and level crossing that form the entrance to the garden from the field.

From here the line takes a right hand curve, through a tunnel in the hedge and out into the field, where it shortly arrives at Ingfield Central. This station has been provided with two platforms, a passing loop, two sidings and a waiting shelter.

After this it follows a gentle right hand curve around the school buildings to Marsh Halt, which has been provided with a small platform. 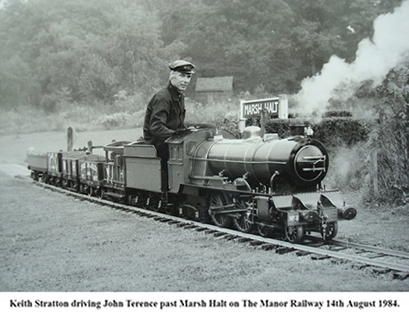 The line then enters the woodland section and into Bramble Hill, were this station has a passing loop, island platform, engine shed, turntable, traverser, water tower and carriage shed.

Leaving Bramble Hill after crossing a small dyke by a bridge the line continues on a right hand curve and up a 1 in 29 incline to Highbeech were a small woodland halt has been provided at the top of the incline.

It then continues to meander through the woodland to its terminus at Hazelbank End where there is a single platform, a run round loop and a siding.

In August 2008 when I handed the custodianship of the railway over to Chris Knibbs, I requested that it be renamed The Ingfield Light Railway and from here on Chris will provide updates as to how the line is progressing as he wishes to ensure that Keith's vision is kept alive.