Skip to content
The good news is we now have a date for Ingfield Manor School Fete Day. It is on Sunday 11th June 2017. More details to follow shortly.
Ingfield Light Railway will be operating as part of the Ingfield Manor School annual fete on Sunday 12th June 2016. All proceeds go to Ingfield Manor School.
Due to unforeseen issues the date of the next public running day at Ingfield Light Railway has been moved from Sunday the 15th of May to Sunday the 22nd May. Sorry for any inconvenience. More details to follow.
A very successful weekend was had at the Brighton Modelworld exhibition! We had many people making enquirers about our railway and we proved very popular with the public and 'Crowborough' (and 'Anna') were both kept busy shuttling up and down the track almost non stop for the three days. South Downs Light Railway Society shared the operational duties in the form of taking fares, issuing/checking of tickets, loading/unloading the trains. The takings are still being counted but early indications suggest that the portable railway has made more money than last years static exhibit brought in.
Once the show had shut at 5:00 arrangements were made for the packing up operation of the railway and transportation back to Ingfield. By 18:30 both locomotives, wagon and track panels were loaded onto two of our trailers and headed for home. Special thanks must go to all at SDLRS for their assistance, particularly Paul Cowlin & Jerry Chivers. Aidan Favell and Roy Harwood for their excellent coordination of packing up the display. Neal Catterall, Cameron Smith, Ben French and Callum Conway for operating the railway as well as packing up and of course to Chris English for making it all possible. See you again next year! 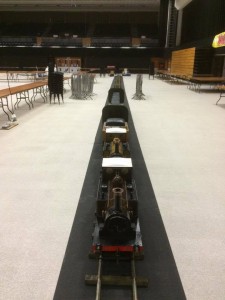